Fire evacuation procedures are critical to the safety of the workplace. When people evacuate from their original locations, it is with the intent of bringing them to a safer, more secure place. This is why it is important to find and assign an assembly area that will fulfil the requirement of established safety guidelines. In dealing with an emergency situation, the foremost concern is to get everyone out of harm’s way at the soonest possible time. Having a pre-planned destination at the end of the evacuation route, therefore, should save everyone the trouble of not knowing where to go or what to do next, at the risk of putting themselves back in danger, or possibly impeding emergency response operations. 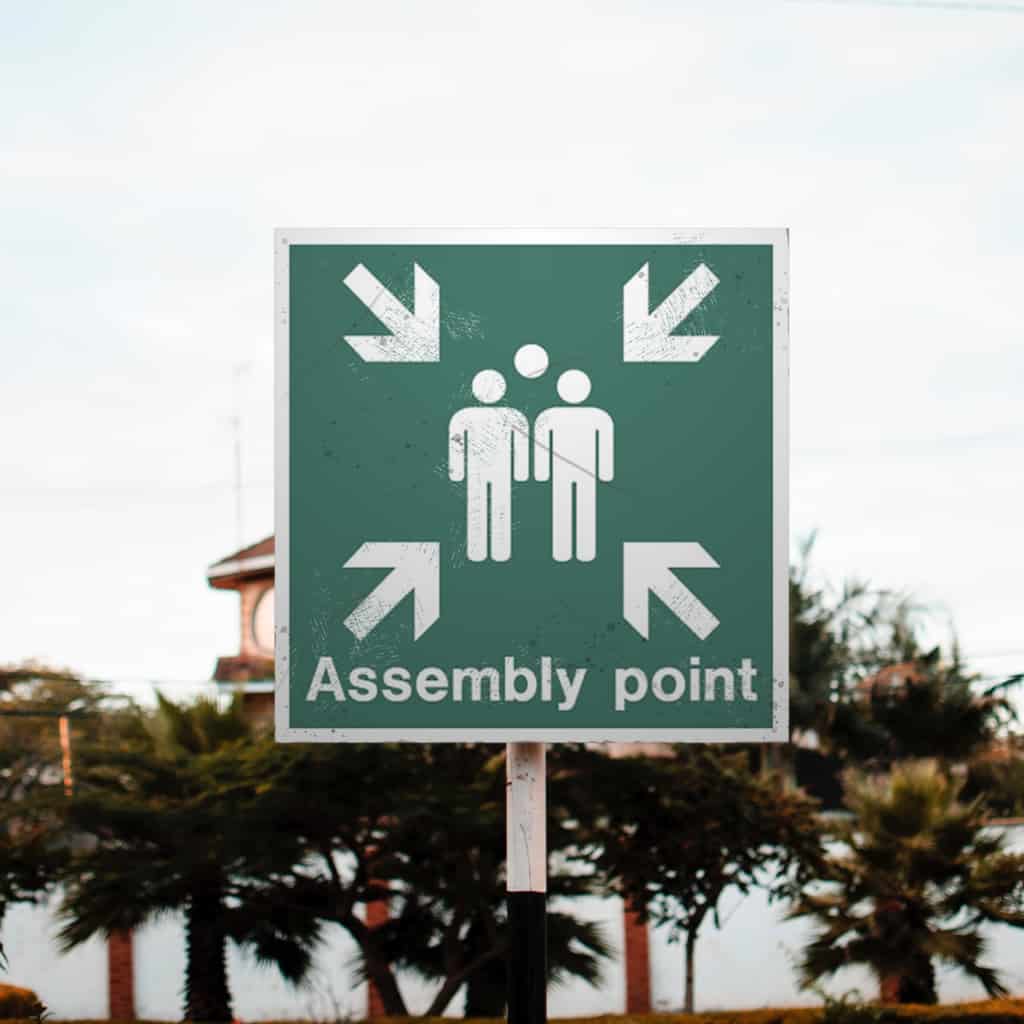 Ideally, an assembly area is one that is deemed to be a safe enough place where evacuees may stay in during the course of emergency procedures. The primary consideration should be its distance from the potential emergency site and size. As with any emergency plan, there should also be a contingency plan for the assembly area. As such, the ECO team should be able to identify both primary and secondary areas for the specific purpose of evacuation.
Should anything happen to the primary evacuation area, at least there will be another location where the evacuees can go. This scenario is most likely in cases of a bomb threat, or if the primary areas are blocked or inaccessible. This follows, of course, that everyone will be made aware of both options, and not just the primary assembly area.

When it comes to size, the ECO team must also take into consideration how many people at any given time are most likely going to be inside the building. Whatever that figure is, give or take a few heads more, it is the number of people that the chosen assembly area must be able to accommodate.

Take note that an assembly area is just meant to be a temporary stopping point for the evacuees. Ideally, this will serve as the venue wherein the ECO team members will get a headcount of each and every evacuee. Assuming that a buddy system is in place – as there should be – it is also in the assembly area wherein any missing evacuation buddy, or possible cases of injury, must be reported to the ECO team members.

No one else is allowed to leave the assembly area, especially if it is for the purpose of returning to the site of emergency for whatever reason. Evacuees are supposed to stay there, and instead, report to the ECO team their concerns, who will then address the issue, or report it duly to the respondents to take proper action. The endpoint of an evacuation is at an evacuation centre, or any alternative accommodations that will be able to provide basic welfare facilities for the people.
The evacuation centre is also where the evacuees will be processed, such as for registration and allocation to temporary or nominated accommodation. Although an assembly area is merely a temporary stopping point, though, it must, at the very least, also be able to provide minimal service, such as light refreshments, personal support, and destination check. The availability of such facilities would, of course, depend on the nature of the hazard.

In choosing the proper venue for assembly between the point of emergency and the evacuation centre, it is most important that the location be as close to the boundary of the evacuation area as safe as possible. It is a critical component of your fire evacuation procedures. It must also be recognisable enough within the community so as to avoid the risk of people getting lost or waylaid going there. This is to ensure that the evacuees will not be so terribly exhausted from the distance, but at the same time, will be safe enough from the assembly area’s location from the effects of the emergency.

Aside from distance, it must also be determined if the path to the location is going to be safe as well for the evacuees. Are there any possible obstacles on the way? If yes, what are these, and how serious of a threat or risk are they?
For example, does going to the assembly area require crossing a bridge or the main thoroughfare where there is expected to be a lot of traffic? What are the structures surrounding the area, if any? Are the materials deemed safe or solid enough to provide temporary shelter for the evacuees?

Considerations, such as whether or not the assembly area will be in open space also matter. This is especially necessary for cases of earthquake situations. As proper evacuation training notes, people should evacuate to an open area so that they will avoid the risk of being hit or getting injured by falling debris.

It should also be noted that the assembly area should be able to accommodate space for equipment or transportation that may be necessary to bring the people to the official evacuation centres. Once at the assembly area, it will be up to the determination of the ECO team if the evacuees are all cleared to head off to the next location.

Do you regularly review your fire evacuation procedures? Does your assembly area meet the above recommendations?

To find out more about evacuation standards and procedures, visit our 100% Compliant website.

About the Author: EvacServices Team

Send me a message